111
SHARES
ShareTweetSubscribe
Want More Good Stuff like this?
Sign up to receive emails with new articles when they're published!
×

1. Tell us about yourself.

I have recently just completed my 7th year teaching. My first five years were in Polk County at Haines City High School, and the last two years were at Boone High School. Before teaching, I was a stage management student at Florida State University. After graduating with my BFA in Design/ Technology, I moved to Orlando to work for FX Group a company that built and designed scenery for special events and news television studios. While teaching at Boone and Haines City, I also attended the University of Northern Colorado and earned my MA in Theatre Education. In addition to teaching, I also have an active family life with my five-year-old son and husband who is also in theatre. 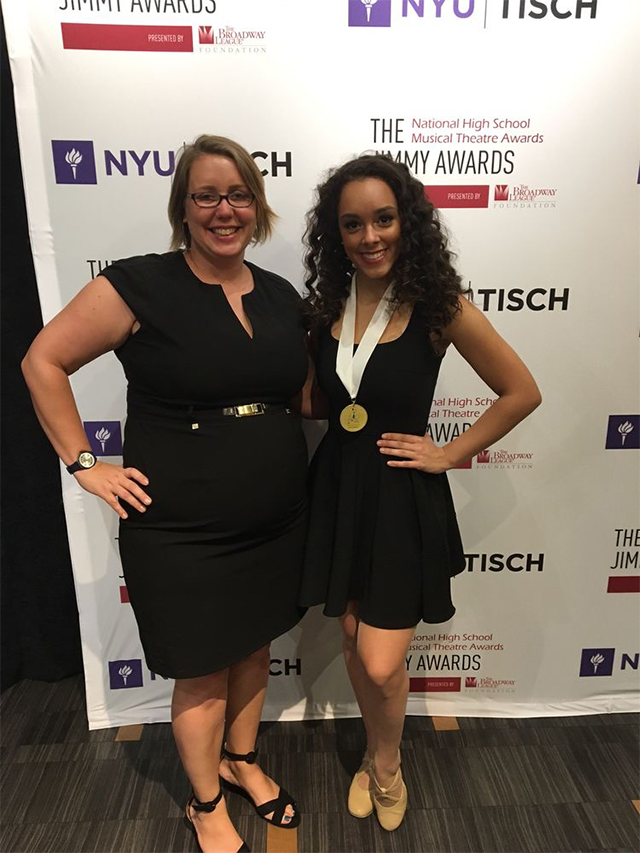 Nadine Love and Sofia Deler at the Jimmy Awards.

2. What do you love about teaching?

My favorite part of teaching is helping students on their journeys. I love being able to work with them and and coach them to find their own discoveries, whether it is in a particular role or an area of theatre they did not know they would excel at. Teaching theatre allows for us to have four years with our students and the progress they make not only in theatre but academics and self-discovery is wonderful.

3. You recently attended the National High School Music Theatre Awards a.k.a. The Jimmys with your student Sofia Deler. What are the Jimmys?

The Jimmy’s are the National Musical Theatre Awards. Students from across the country won the opportunity to attend the Jimmy’s by winning their regional competition. 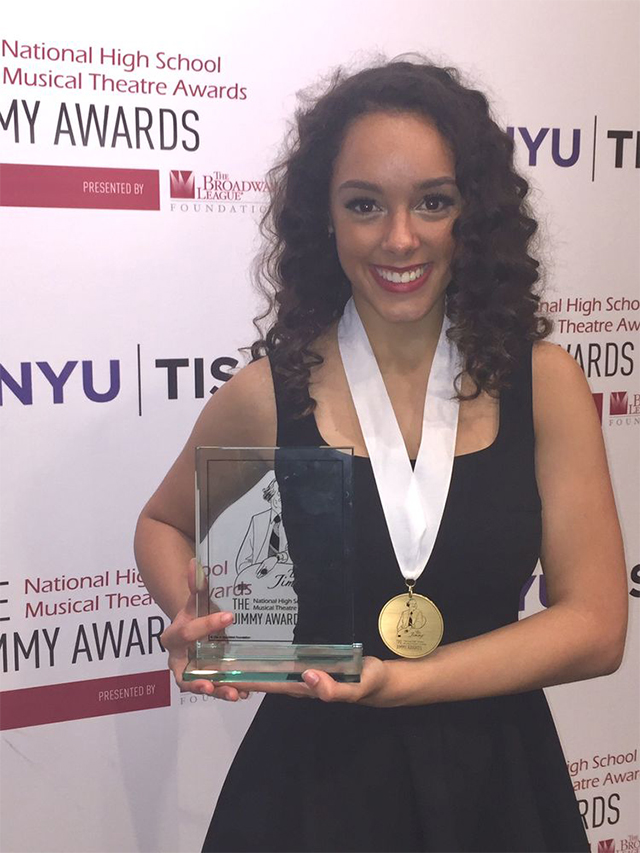 4. How did Sofia qualify for the Jimmys?

Sofia earned this opportunity by winning the Applause Awards at the Dr. Phillips Performing Arts Center. All the students at the Jimmy’s had to earn the title of Best Actor or Actress in their high school productions. Sofia earned Best Actress in Songs For A New World and All Shook Up at Boone. The Applause awards sends out adjudicators to the schools who apply and through the adjudication the students are nominated for awards. Sofia won Best Actress for both her musicals this year.

5. What did you do to prepare Sofia before the awards?

First Sofia spent many hours with her voice teacher, Lauren Langa, working on her solos. Sofia and I worked together selecting material that she would need to audition with for the Applause Awards. The Applause Awards held auditions prior to their awards for all the Best Actor or Actress nominees who wanted to be considered for the Jimmys. The students had to bring with them their 32-bar cut from their musical they were nominated for and an additional song. The process mirrored what the students would go through if they got to go to the Jimmys. Prior to arriving to the Jimmys, Sofia had to go to the DPAC and record her 32-bar cut from Songs and her additional song — “She Used to Be Mine” from Waitress. The recording was used to determine if Sofia would be in the Melody Group or the Production Group. The Melody group got to sing their 32-bar cut from the musical at the actual awards, and the production group was in the opening and closing number along with an additional group number. 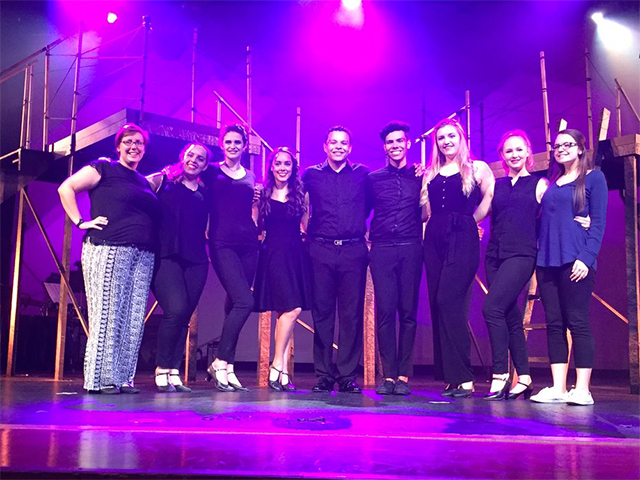 6. How did you feel when Sofia was announced as the winner?

I was sitting right next to her best friends and parents, and it was a feeling of immense joy. We were all so proud of Sofia. When she sang “She Used to Be Mine” she brought me to tears, I was so moved by her performance, her story telling, and command of the stage that I was still feeling that moment when her name was announced. When she did win, we immediately jumped up cheering.

7. Both Jimmy award winners were from Orlando this year, what do you think makes educational theatre in Orlando so special?

I think that Disney and Universal have a lot to do with it. Arts in Orlando are valued by our communities. When your community not only values art but art education, it allows for more attention to be on the art community. We have a very strong community and many professional theatre companies in Orlando, and they want to help the schools as well. They value theatre education and run theatre programs for the youth. We also have the privilege of having great artists in our town who worked for Disney or Universal at one point and want to give back, and they do that by helping in the schools.

8. How did the students and administration in your school and community react to the news about Sofia’s win?

My principal is extremely supportive of our program and the amazing year we have had. We are very lucky to have a principal that supports the arts and values what we do in the classroom. The next day I organized a surprise celebration for Sofia, and it was quite the event. Everyone who worked with her and inspired her was there to help celebrate, including her Orlando Repertory family, Howard Middle School, and Boone High School friends.  OCPS district personnel also wanted to be there to help us celebrate her amazing achievement. 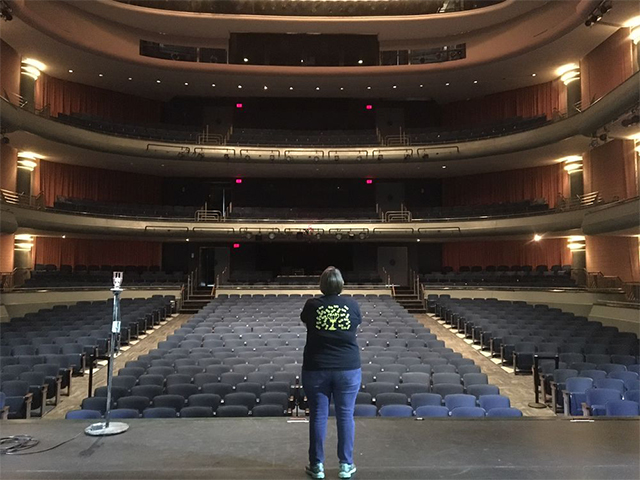 Nadine Love checking out the space for Songs For A New World where they performed at the Straz Performing Arts Center for their MainStage production.

9. What methods do you use in your classroom to bring out the best in students like Sofia?

In the classroom, I worked very hard to challenge my students. I totally believe that we need to meet the students where they are and then constantly push them to achieve their very best. In order to be able to do this, I provide my students with a wide variety of opportunities to grow. We have an underclassman play where only our freshman and sophomores can audition and is directed by a senior. Every year, I try and pick a show that will challenge my students — Songs For A New World was that show. In the classroom, we also have different routes the students can take for their classes. It isn’t just Theatre 1-4. We have Theatrical Design and Production 1-4, Theatre 1-4, Dual Enrollment Theatre Appreciation, Acting, Theatrical Direction and Stage Management. Having a wide variety of classes means that we go can more in-depth to the content with smaller class sizes, and students are actively engaged with wanting to learn more.

10. What advice would you give other teachers who are interested in participating in the Jimmy Awards?

The first step for teachers would be to see if they are in an area that has a regional competition. We were blessed with having the Dr. Phillips Performing Arts Center. Second would be to pick a show that  has qualify lead roles that matches your students abilities and still requires them to grow. 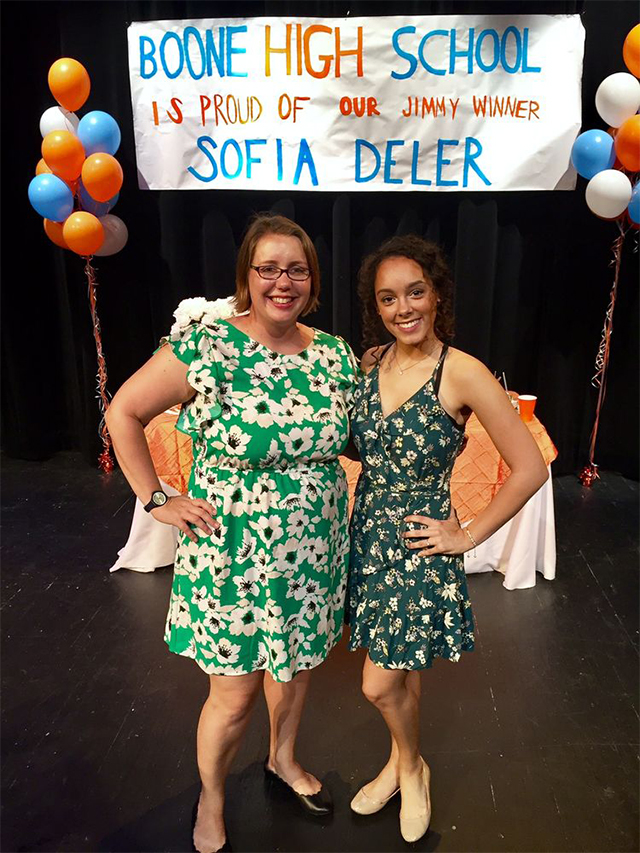