287
SHARES
ShareTweetSubscribe
Want More Good Stuff like this?
Sign up to receive emails with new articles when they're published!
×

7 Greek and Roman Playwrights You Should Know

Our modern drama and comedy comes from thousands of years ago when people wore togas and books were a thing of the future. Remember Thespis? He was one of those toga-wearing, play-loving guys who stepped out of the chorus to become the first actor — the reason you’re called a thespian today. With our list of Greek and Roman playwrights below, you’ll learn a thing or two about where are art comes from…and maybe you’ll be inspired to take up a monologue or two from Seneca or Aristophanes while you’re at it. 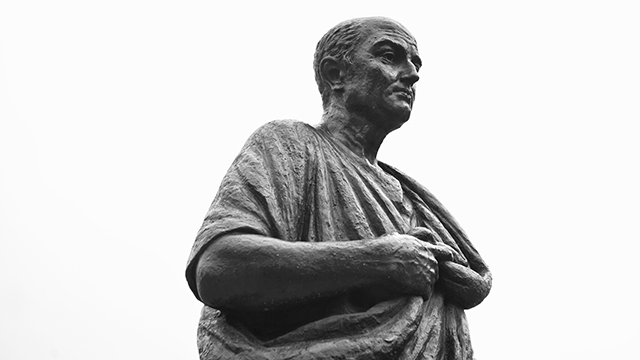 The father of tragedy, Aeschylus was born in a small town outside of Athens and worked in a vineyard during his youth. One night in a dream, he was visited by a vision of Dionysus (the god of wine, partying, and theatre) and was inspired to begin writing plays. He began writing as soon as he woke, and his first play, a tragedy, was performed in 499 BCE when he was only 26 years old.

Trivia: Aeschylus was killed by blunt force trauma to the head — an eagle has dropped a tortoise on Aeschylus’s head, thinking the head was a rock appropriate for opening the turtle’s shell.

Popular Plays: Prometheus Bound, The Persians, Seven Against Thebes, The Suppliants, Agamemnon, The Libation Bearers, and The Eumenides

Not much is concretely known about Euripides, only that his father wanted him to be an athlete, but Euripides’ passion for playwriting took hold. By the time the writer had died in the solitude of a Macedonian village at the age of 74, he had written at least 92 plays.

Trivia: Euripides featured strong female characters in his plays, so much so that male audience members were often shocked by the words or actions of characters such as Medea or the Trojan women.

Aristophanes, the father of Old Comedy, was famous for calling out political and societal figures for their hypocrisy, extravagance, and misdeeds through satirical plays. Though not much is known about his personal life, we do know that he was a comic poet writing for theatrical audiences.

Trivia: Though many artistic renderings of Aristophanes depict him as having a full head of hair, comedic lines in his scripts indicate that he may have been completely bald.

Popular Plays: The Wasps, Lysistrata, The Frogs, Ecclesiazusae, The Clouds, and The Birds

Sophocles wrote 120 plays over the course of his life, but, unfortunately, only 7 have survived in completion. Sophocles was the most celebrated playwright in the dramatic competitions of Athens for over 50 years. He competed in 30 competitions, won 18 of them, and never earned anything below second place.

Trivia: Sophocles was the first dramatist to introduce a second character onstage (besides the central figure and the chorus). This allowed for more conflict between characters and more dialogue.

Though not much is known about Plautus, we do know that he wrote about 130 plays, with 20 of them having survived. He studied Greek drama in his spare time. Most of his plays were adaptations of Greek plays re-written for Roman audiences.

Trivia: Before he was a playwright, he was stage-carpenter or scene-shifter in his youth, which may have inspired him to become a playwright.

Terence’s life is mainly a mystery, but his influence over Roman drama featured a conversational style of dialogue which was not commonly seen in other Roman or Greek playwrights’ dramas. Terence was brought to Rome from Africa as a slave and was educated in the classics. He was freed by his master, and after writing a number of plays, took a boat to Greece. It is presumed that Terence died at sea, but all six plays he wrote have survived.

Trivia: Because his plays contained clear language, his works were heavily used in monasteries and convents during the Middle Ages and the Renaissance so that Scribes could learn Latin.

Also known as Seneca the Younger, this playwright was also a tutor and later advisor to the Roman emperor Nero (who was also kind of crazy). His plays were read widely in Elizabethan England, especially by Shakespeare and his contemporaries.

Trivia: Nero forced Seneca to commit suicide after Nero suspected Seneca of being involved in a plot to assassinate Nero. (A suspicion that was never proved.)