Though theatre was my first love, film has stolen my heart in recent years. In Part II of our ongoing Theatre in Film series, we explore the latter years of Classical Hollywood Cinema (and British film) when Technicolor was new and movie musicals, filled with rich color and vibrant acting, lifted off the screen. For the second film in Part II, we celebrate The Good Companions from 1957.

Three unacquainted individuals band together to save a failing touring theatre troupe called the “Dinky Doos”. Inigo Jollifant (John Fraser) is a school teacher who has a knack for playing piano; Miss Trant (Celia Johnson) is a wealthy spinster, who has recently inherited her father’s estate; and Jess Oakroyd (Eric Portman) is a recently laid-off gentleman with a penchant for theatrics. All three happen upon the troupe, led by starlett Susie Dean (Janette Scott). Jollifant and Oakroyd convince Trant to fund the “Dinky Doos” under the name “The Good Companions,” thinking the new name will bring success. After a mostly unsuccessful initial run of the show across England, the troupe’s lead dancer, Jerry Jerningham (Paddy Stone), marries Lady Parlitt (Joyce Grenfell), whose family manages a chain of theatres. This secures the troupe’s place on the stage and results in Susie achieving stardom in a magnificent London revue.

The Good Companions is a remake of the 1933 film, The Good Companions, based on J.B. Priestley’s 1929 novel of the same name. It was written during a time when touring shows were popular between WWI and WWII, and large sets weren’t as portable and capable of being transported easily (within the world of the film) like they are in the 1957 film. The ‘57 version takes advantage of its time period, when large scenery was expected, and uses colorful, lavishly decorated sets that enhance the grandiosity of theatrical musical numbers, but it doesn’t carry the realism of the 1933 film. What this film does achieve is the same togetherness of community that the 1933 version possesses. Oakroyd defends the honor of Miss Trant after a belligerent theatre owner tries to intimidate her. The troupe has dinner together almost every night with toasts, arguments, and laughter. And in the final moments of the film, the troupe looks on from the audience as Susie performs for a crowd of hundreds on the West End.

The Good Companions upholds two of the oldest and richest aspects of theatre: community and family. The troupe, a family of performers, finds itself in dire trouble, and when three outsiders join their ranks, they’re taken in as family themselves. This parallels our experiences in high school, college, and professional theatre when, as performers in a show, our family and friends become part of our own theatre family. With their support and, sometimes, with skills of their own, they help the production persevere toward a common goal.

For this feature, I viewed both the original 1933 film and the 1957 remake. Though the ‘57 features high-energy musical numbers, troupe camaraderie, and gorgeous sets, its representation of the truth of theatre is, at most, surface. The 1933 film is a more honest look at how relationships in theatre develop over a period of time in the face of hardship. Jessie Matthews portrays Susie Dean in the original film, and her electric effervescence is a model of truthful, in-the-moment acting. At the end of the film, after a brawl and fire have broken out in the theatre, Matthews’s Susie must perform amidst the ruins of the set and burnt curtains. She does so while in tears and, like the theatre troupe, recovers after a hard won battle against adversity.

Below is a photo from the 1933 version, depicting Oakroyd, Miss Trant, Jollifant, and Dr. McFarlane comforting Susie after planted hecklers have driven her offstage. 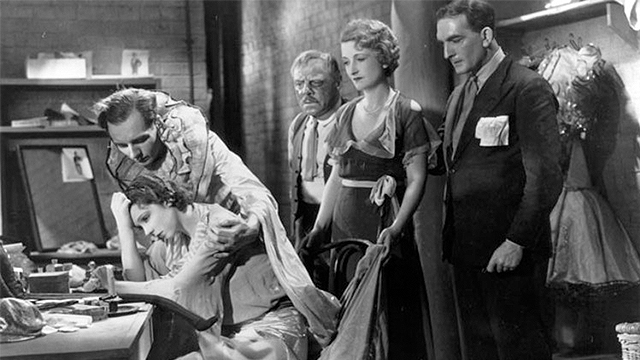 This film is the second featured in Part II of “Theatre in Film”. See below for the others in Part II.